I Created a Virtual Beach Weekend and So Can You!

Last week I posted a couple of photos of a backyard virtual beach I created for my wife and me. Several friends asked me how I created a virtual beach weekend. What was my plan? One friend suggested I write about it. Thank you, @Carol_Stephen.

How the Idea of a Virtual Beach Weekend Started

Other than curbside grocery pick-up and drive through prescriptions, my wife Cathi and I haven’t been away from home since March 18th. On that day, we both donated blood, and on the way home, we stopped at Kroger. I remember waiting in line wearing a mask when the lady behind me loudly proclaimed, “They say masks don’t help – they don’t work.” It was the last time I was out in public.

My wife and I have been married 28 years but have celebrated only seven “official” wedding anniversaries. We were married on February 29th, 1992. Leap year. So, every four years it’s a special anniversary. This year we spent our anniversary weekend in Puerto Vallarta, Mexico, one of our favorite destinations. We stayed at the lovely Villa del Palmar and opted for all-inclusive. The food was marvelous, the beach was beautiful, and the room was exquisite. 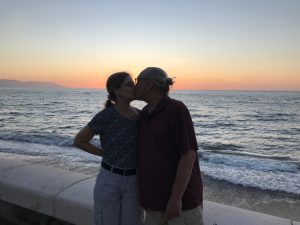 On the evening of our anniversary, we went to the sports bar at the resort, which had karaoke. I signed up requesting Born to be wild. When it was my turn, I asked if I could have a couple of minutes to speak. I explained that my wife and I met more than 30 years ago when she auditioned for and joined my rock & roll band. (She plays bass.) We were wild then and still have our wild side. I shared that it was our anniversary and dedicated the song to Cathi, my best friend.

It was a memorable trip, and although we can’t wait to travel more – we will. We’re both in good health. However, we’re at the age, and I have chronic illnesses that put me in the high-risk category for COVID-19. We’re not going anywhere soon.

My wife had mentioned how fortunate we were to take time in February for an excursion, and that she looked forward to our next trip – in 2022! My mind went to work. Why couldn’t I create a virtual beach in our backyard? I mean other than there’s no sand, beach, ocean, or a pool. Why would I let that stop me? I went to work. 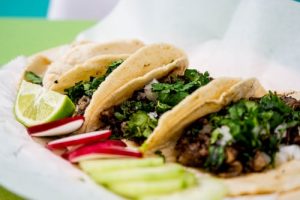 I ordered Mexican food staples from the grocery. I love to cook, and this was going to be fun. My order included taco shells, flour tortillas, chips, black beans, shredded Mexican cheese, jalapenos, avocados, lettuce, tomatoes, and shrimp. My wife is a pescatarian. She eats a vegetarian diet, but also fish and some other seafood, including shrimp. Three days later, I was ready with my groceries. I printed a menu that included vegetarian tacos, salsa and chips, and shrimp burritos. Photo by Tai’s Captures on Unsplash 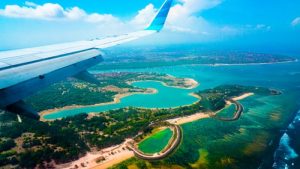 Next, I researched video on YouTube of Puerto Vallarta. After viewing several, I choose one that began on a plane traveling to the resort, and then toured the city and beach for more than an hour. While I was on YouTube, I located a nine-hour video of the beach with the calming sound of waves rolling in. Photo by Yulia Agnis on Unsplash

Cleaning up the Beach

On Thursday, I went to my garden shed and brought out a 12 x 12 blue  plastic tarp, an 18-gallon blue bucket, the kind with two rope handles, and an old beach umbrella. I got out the hose, a brush, and some dish soap and scrubbed them down. I was ready. 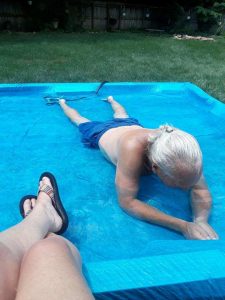 Friday morning, while my wife was on a Zoom meeting, I went to work. First, I spread the tarp out and placed eight concrete blocks making approximately a 10-foot square. Next, I set 2 x 4’s on top of the blocks (I had the blocks but had to piece together the 2 x 4’s. I even used one I had replaced on the shed due to rot. I retrieved it from the trash pile.) After that, I folded the tarp under the blocks and filled it with water from the hose. To my delight (and astonishment), it worked!

For an added touch, I submerged a small sprinkler, attached to the hose, and let it create a bubbly fountain. I added two lounge chairs, turned the blue bucket upside down to make a table, and then used a bungee cord to tie the beach umbrella to the table. I placed two small tables (one was a footstool, on either side of the chairs, and then covered the tops of the tables with blue cloth. I sat the menu on her table. 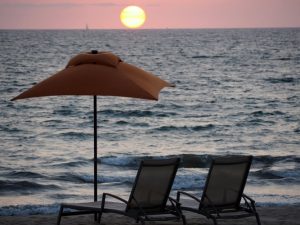 When my wife finished her meeting, I asked her to come to the living room. I told her she was right. We needed a beach weekend, and then I queued the video of flying into the resort on our big screen. She watched enthralled for more than 20-minutes. Photo by James Beheshti on Unsplash

She thanked me, and I said, “But wait, there’s more!” I asked her to put on her bathing suit. She did, and then we went to the back patio. My laptop was set to the ocean scene and sounds and my little transistor radio on a local Spanish music station. Her smile took my breath away. It was pure joy. 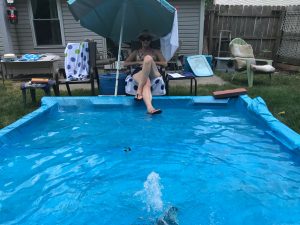 It worked better than I ever expected. It put us in the beach frame of mind. I, with my book and Cathi with her Sudoku, felt as if we were at the beach. So, I guess we were.

Are you ready to create a virtual beach weekend? You may not have a tarp, or blocks, or chairs, but I’ll wager that if you inventory what you do have you can find a way. Holler at me if you need any advice.

We’re planning another virtual beach weekend getaway on the Fourth of July. We’ve decided on a favorite location of ours, the beaches near Grand Haven, Mi. I’m almost ready, but I haven’t figured out what food to order yet. What do you think should be on our Fourth of July Lake Michigan menu?

If you’d like to know more about our decision to self-quarantine, read this, Should You Hunker Down at Home?

So, we had our virtual weekend on Lake Michigan. Our menu included deep dish pizza, Detroit style of course, grilled sausages (Beyond Meet vegetarian, which I highly recommend), and grilled fish fillets. Our background music was from Michigan artists (thank you music time friends!). And I found a 7 hour loop of waves from Lake Michigan on You Tube. We also listened to the races held at Indianapolis Motor Speedway. It’s funny but we could hear the actual cars at the beach all the way up at Grand Haven Michigan. 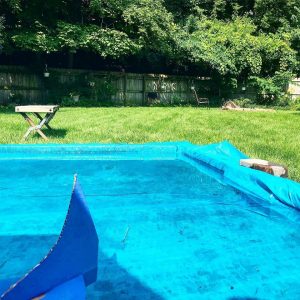 However, there was one downturn. We were surprised to see a shark in a fresh water lake. Next stop west coast. See you then.

About the Author: Randy Clark

Randy Clark is the Director of Communications at TKO Graphix, where he blogs for TKO Graphix Brandwire. Randy is passionate about social media, leadership development, and flower gardening. He’s a beer geek and on weekends he can be found fronting the Rock & Roll band Under the Radar. He’s the proud father of two educators; he has four amazing grandchildren, and a wife who dedicates her time to helping others. Randy is the author of How to stay Ahead of Your Business Blog Forever and The New Manager's Workbook a crash course in effective management, and The Manager's Guide to Becoming a Leader He can be found on Twitter @RandyLyleClark, Facebook Randy Lyle Clark, and LinkedIn Randy Clark.